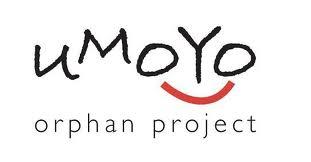 We helped buy bricks for the New School. 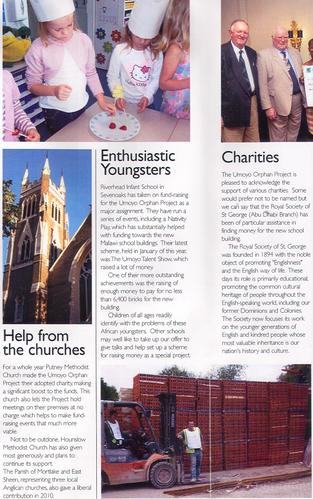 Everyone looked smart in their new school uniform. 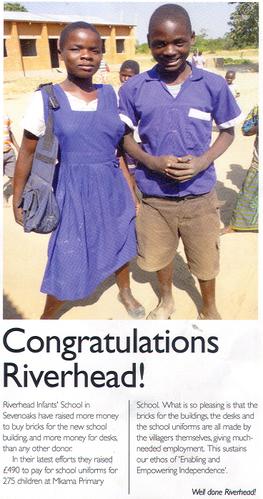 We raised enough money for a Bicycle Ambulance.

In Year Two our pupils learn how they can have a positive impact on the lives of other children elsewhere in the world.  The Umoyo Project is a UK registered charity which funds specific projects in a dedicated area in Northern Malawi.  Their motto is “enabling and empowering independence”, and as a school we have had an association with the charity, through fundraising, since 2010.  During our “Friendship Week” in November that year, every child took home a leaflet explaining how we would start raising money to buy bricks to help build a new school for the children.  Every £10 raised bought 100 bricks and it was lovely to see the Year Two children organising and running meetings with the School Council to decide how the monies would be raised.

We held a talent show and mini fair activity morning and along with collections from our Christmas Productions, in 2011/2012 we raised enough money to provide 6000 bricks to complete the building of the school.  The project leaders confirmed that without the children’s efforts it would not have been completed.

In 2012/2013 our new Year Two children decided to hold a school quiz, toy sale and fun run to raise money so that all the children at the new school could have a smart school uniform.  This also benefitted the wider community as local people were employed to make the uniform.  Having achieved this, in 2013 the children raised funds to buy a much needed additional bicycle ambulance by organising a wood crafts and bring and buy toy sale.

In 2013/2014 the children embarked on the latest fundraising project to help complete the building of a Health Clinic.  The Umoyo Project needs another £2,000 to complete the building of the Clinic.  So far we have contributed £425 at Christmas and  the children organised a cake sale and nearly new toy and book sale in February which together raised an impressive £524.80, which when exchanged in Malawi Kwacha is worth at least 10 times as much as at home in England!!  The children have plans in place for further fundraising activities including a clay modelling day!

In 2014/2015 our fundraising events included making creative bookmarks; hosting a film night; a welly walk and teddy bear's picnic.  We raised an amazing £750. in total during the school year. The money raised went towards building a new, much needed, well for the villagers.

In 2015/2016 the Year Two children organised a day of fidget spinner making, a day of biscuit making and a day of circuit training.  These events raised £754. which was used to buy blankets for the healthcare centre.

In 2016/2017 the children planned two fundraising events to support the charity. They baked and decorated cookies and organised a fun run. The fun run consisted of running as many half mile laps around the playground as they could in half an hour. For every lap they ran they were given a stamp on a very special map. Both events raised a total of £1,070 which was used for new uniforms and desks.

In 2017/2018 the children continued to fundraise for the project by running a mask making workshop. Everyone was invited to design, make and decorate an African animal mask for a donation. The event raised £207 which will help towards refurbishing the school library. For our last fundraising event of the school year, Woodpecker Class decided to organise a “book” sale. Everyone was encouraged to colour-in and decorate a printed book mark to take home or use in school. We also sold “Malawi” hat. The hats are made especially for our children and parents by a tailor in Malawi. Both events raised £145 which brought the total amount raised for the whole school year to an amazing £774.

In 2018/2019 our fundraising events included making origami snakes, pasta bracelets and elephant greeting cards.  We raised over £639 in total which went towards buying bricks for a new library, school uniform and additional bicycle ambulances.

In 2019/2020 we made decorative monkey door hangers and beautiful butterflies.  Unfortunately due to COVID we were only able to organise two events during this year, however we still managed to raise an amazing £523.  The children still needed money for a new library and so our donations went towards buying some bricks.

In 2020/2021 we made origami snakes, took part in a fun run and completed an on-line quiz.  We raised £582 which was a fantastic effort by everyone.  The money was sent to the children for their new library.

During each of the years we have continued to give large contributions from the donations made by parents and family at our wonderful Nativity plays.

Working with the Umoyo Orphan Project is now an integral part of the curriculum.  Children learn of their responsibility to others and their capacity to make a difference.  Through geography the pupils learn about Malawi, it’s similarities and differences to the U.K., and we are most grateful to Sarah and Chris from the project in maintaining these valuable links with our school.

We were delighted to welcome Sarah Mtonga back to school. Sarah is the founder of the Umoyo Project and spoke to children about raising money for the children in Malawi, to provide them with educational equipment, uniforms, books and sports equipment.

Our Eco and Gardening Club sold their harvest of potatoes and pumpkins to the parents and raised £30.25 for the Umoyo project.

In Term Six Maple Class decided to ask everyone to make origami snakes to raise money for the project.  The event raised £143.50 which meant that we had a grand total of £582 for the whole school year. 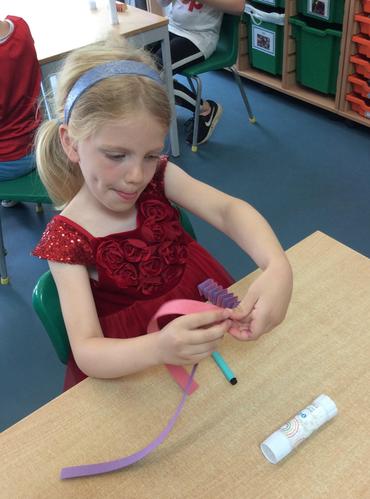 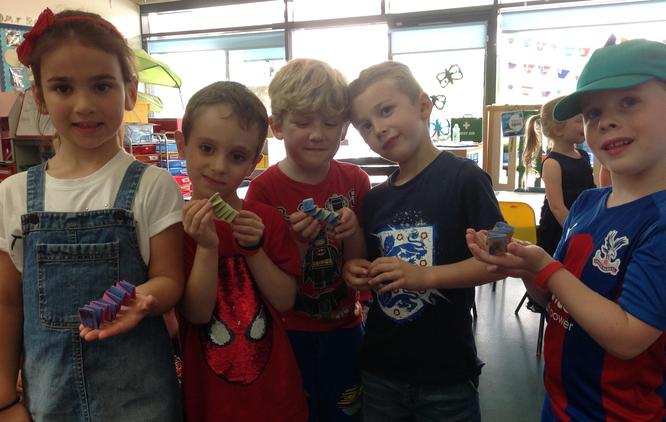 For our first fundraising event of the year, the children took part in a fun run and enjoyed getting their cards stamped. The children in Beech Class had asked the rest of the school to record the number of laps they ran. They wanted to find out if we could run the distance of the length of lake Malawi which is 365 miles long! As a school we ran 2550 laps of the running track which is roughly 196 miles! Not quite, but "WOW" what an achievement!

On the day we raised £277 to help go towards the bricks for a new library at Mkama school in Malawi. 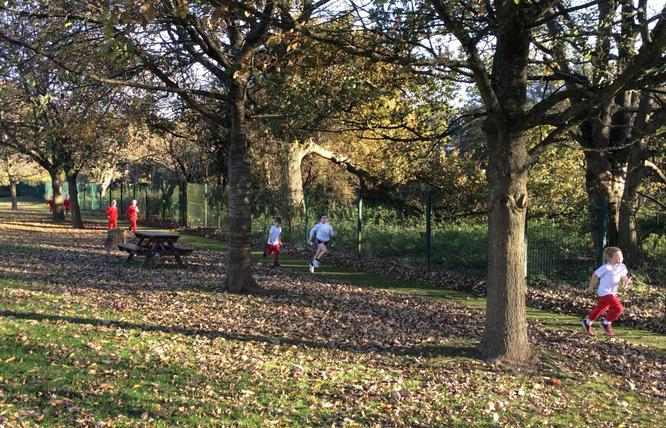 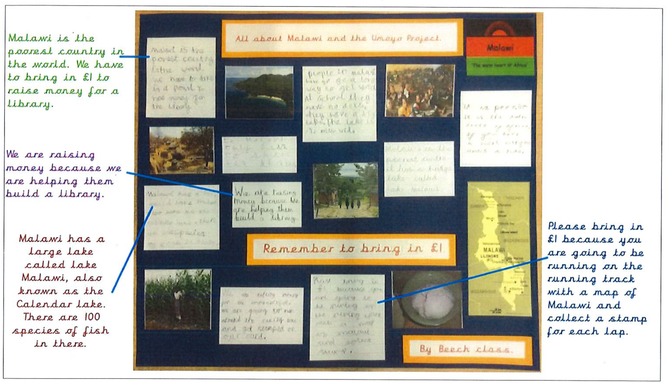 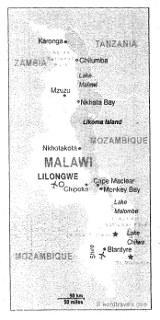 Mrs Browning, Mrs Wolfe and Mrs Powell visited the Umoyo project in Malawi during the

half term and have seen at first-hand the difference your generosity is making to the children and families in Loundon.  Please do have a look at the photos on the web site and thank you for your continued support and donations.

Unfortunately not the ones with chocolate chips.

Some cookies are necessary in order to make this website function correctly. These are set by default and whilst you can block or delete them by changing your browser settings, some functionality such as being able to log in to the website will not work if you do this. The necessary cookies set on this website are as follows:

Cookies that are not necessary to make the website work, but which enable additional functionality, can also be set. By default these cookies are disabled, but you can choose to enable them below: