As part of their D&T topic, the children designed and made healthy smoothie drinks.  They tasted some branded fresh and frozen drinks such as strawberry and banana, and spinach, mango and lime.

We had some fantastic costumes for the Year Two Superhero Day, with children coming to school dressed in fictional characters such as Batman and Supergirl and brilliant homemade costumes such as a lifeguard, witch girl and snake boy.  As part of their topic they have designed and made their own masks, written instruction for creating their own superhero and investigated materials that would be suitable for super stretchy Elasta Girl!

They all became first aid super heroes by taking part in a workshop recently.  Everyone learnt how to call for emergency help, put someone in the recovery position and the part they all loved the most – how to make a sling for a broken arm!

Year Two travelled back to the Victorian times to take part in a Florence Nightingale Day workshop and everyone looked wonderful in their outfits.  They learnt about the hospital in Scutari and her work during the Crimean War; worked at different stations handling replica artefacts; wrote their postcards home to loved ones; made medals of honour and candle holders.  They used their experiences of the day to enhance their learning in class during their English, history and geography lessons.

Thank you to all the parents and carers who helped their children produce some fantastic and informative science projects.  Each child was asked to research a specific body part and we had some wonderful power points, written work and creative displays.

The children learnt about Judaism and the meaning of Hanukkah.  They brought in their most precious objects and talked about which objects are precious to people who practice the Jewish faith.  They also tasgted potato latkes, made by our wonderful kitchen staff, with apple sauce which is a traditional Jewish food.

The Year Two children took part in an exciting Diwali day, writing poems and their own versions of the story of Rama and Sita, as well as learning how to dance in Bollywood style during their workshop. They dressed in traditional Hindu costumes to re-enact the story and handled religious artefacts.

Year Two’s new school year started with “Amazing Africa”.  During the term they will be introduced to the continent of Africa, and the country of Malawi in particular, whom we have special links.  In writing they have been focussing on information about Malawi and writing non-fiction statements, and creating questions to ask Sarah Mtonga from the Umoyo project.  They were also visited by the Iroko Theatre Group and learnt traditional Africa fables which was brought to life using live drumming, dance, songs and chants. 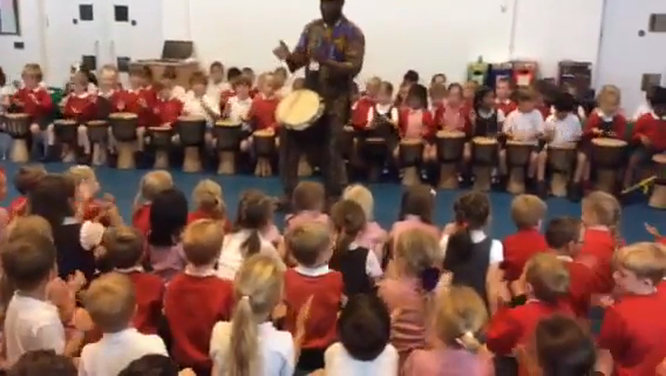 The children took part in a wonderful visit to the animal park to consolidate their learning in geography and science.  They explored the zoo and attended a workshop where they learnt more about the animal habitats and adaptations.  As a treat, and to mark their last visit as Riverhead children, the Governors kindly paid for ice lollies for everyone!

Following on from their visit to the Wildlife Centre, the Year Two children designed, created and evaluated a mini beast that has a moving part incorporating pneumatics. Their butterfly creations looked amazing.

Year Two's Extraordinary Environments topic started with a wonderful visit to the Sevenoaks Wildlife Centre to discover which mini beasts and animals lived there.  The children studied the landscape and using maps walked around the reserve looking at the environments the creatures lived in.  They found mayfly nymph in the pond, woodlice under the logs and spiders in the bushes and trees.  Thank you to our parent volunteers who helped on the visit and to the team at Sevenoaks Wildlife for their expertise.

The Year Two children enjoyed their “Titanic Day”.  They dressed up as characters from the ill-fated ship and learnt about route and journey it took as part of their migration topic.  In their literacy lessons, they used their imagination to describe how it felt to walk onto the magnificent ship; what the journey was like; and what happened when they collided with the iceberg. Thank you to everyone for the fantastic costumes.  We are pleased to announce that

everyone made it to New York without getting wet!

During their D&T lessons, Year Two have been learning about the ingredients and manufacture of shop bought smoothies, and then applied this knowledge to combine different foods to make their own healthy drinks.  The most popular flavour was banana and strawberry.

Some of our children were invited to join the residents of Rivermere to help them design Christmas cards for a competition they were entering. They enjoyed our children’s company so much they invited them to stay for their regular exercise class, and we were told afterwards that the ladies and gentlemen had never been so lively!

THE GREAT STORM AND OTHER RIVERHEAD HISTORICAL FACTS!

Year Two found out interesting historical facts about Riverhead Infants’ School since its opening in 1871. They were also visited by a local resident, Mrs Roberts, this week, who spoke to them about the “Great Storm” of 1987. She shared her experiences with them and told them the significance of the seven oak trees on The Vine that gives our town its name.

The Year Two children designed and made functional marble runs using recyclable materials for their Design and Technology lessons.  The end results of amazing and they shared their designs with the rest of the school!

As part of their "Minibeast and their Environment Topic", the Year Two children

mastered the technique of weaving!  They started with paper and wool weaving and then transferred these skills to our outdoor school environment by collecting natural materials from the woods and using them to weave a giant loom!

Nine of our Year Two children were chosen to represent the school at the “Work Like an Artist Day” in Hextable.  The children joined other young leaders of all ages to participate in different art and dance challenges.  The focus was to develop their leadership skills and confidence in dance and to bring those skills back to school to share with their peers. They used mini cameras to film some of their friends in Year Two dancing to a choreographed dance routine.  Please do take a look at the company who organised the event by visiting www.flexerandsandiland.com.

Six of our Year Two children were invited to represent the school at a special event of the Queen's Baton Relay to celebrate the Commonwealth Games.  The "Commonwealth Bus" took them to Tonbridge Castle where they joined other school as well as Lizzy Yarnold, Dame Kelly Holmes and other sporting professionals.  Please click on the following link to see all the lovely photos of the event http://www.itv.com/news/meridian/story/2014-06-05/commonwealth-games-queens-baton-on-its-way-to-kent/

Some of our Year Two children were invited to write a Poem about an imaginary adventure which was judged for the Young Writers' Competition.  Sixteen of our pupils had their work published in the "Poetry Adventures Tiny Treasures".

Click on the links below to see some examples of the children's work.